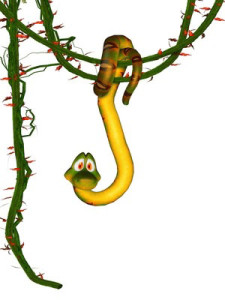 How to know when you have a green tail…

Our personal small-stuff can offer us a host of information.  But small-stuff can also be about tolerating or putting up with other people’s behaviour or comments.  I’m sure you’ve heard the expression, “the straw that broke the camel’s back”.  Well the straw is an example of small-stuff and the camel could be you. It’s a powerful metaphor, which says that you are at a breaking point and it would only take one more seemingly insignificant comment or behaviour to send you reeling into an explosive reaction.

Small-stuff, like the straw, are often low grade, under-the-radar irritants, which are easily missed. They can fester and irritate like a pebble in a shoe or an unreachable itch.  They can be clandestine in nature but if noticed can offer a glimpse into the discord, which percolates beneath our layers of protection. They are the yellow warning lights… a cautionary message asking to be acknowledged. Best to pay attention to small-stuff irritations because they could be precursors to change. Notice them and prepare for the change they are nudging you towards.

If you choose to ignore a consistent nudge it could lead to a far greater and more serious intrusion. For example…

The small-stuff are not meant to instill worry or fear but rather to draw attention to something lingering. Occasionally an irritant when handled with a neutral mind, void of judgment could be transformed into something beautiful. In nature, an oyster containing an irritant will produce nacre, a smooth coating that will build up layer upon layer to create a pearl.

Regardless of whether irritants lead to good or bad results, small-stuff are usually present for a reason. Notice them. Be like an animal in the wild when hearing a rustle or a subtle shift in the air. Its head will lift; ears perk up. Stillness will descend.  It knows that attention may be needed for imminent change and action.

So turn around and check out that green tail or any other small-stuff that may be hovering over you. Identify the nacre, which could potentially layer your small stuff… positive or negative.

Notice it… pay attention to it. Look it straight in the eye.

Acknowledge it… Draw it up to your conscious mind and say “Ahha! I feel you, I see you no matter how small you are.” Takes less energy than denying it.

Communicate it… name it and share your discovery with someone.

Neutralize it… identify your attachment to it…positive or negative. Defuse it by finding the middle ground.

… Because the small-stuff can be critically important…

“Don’t ignore the small things – the kite flies because of its tail.” Hawaiian proverb

“The chains of habit are too weak to be felt until they are too strong to be broken.” Samuel Johnson